i fly to budapest, where i take a couple of buses to the slovakian border. i see some refuggess around the station. MK picks me up and brings me to dunajská streda, where i will work as resident, with another dozen artists, all invited by yuri dolan, artist director of the annual secuence of symposiums. we have private rooms in a collective inner garden residential resort, with a big underground living room, where eva, the cook, takes care of the meals. we eat lots of meat, even in breakfasts. cabbage and soups are the best. some kilometers away, in the periphery, between fields and industrial terrain, we have atelier space and studios to work on our art. i use no space, since i play dynamics.

each artist finds his own place, since there are different scenarios. i record. i spend some time watching each artist work. i build a situation. i talk and comment on the art everyone makes. i build memory and conversation with artist as context for this current ongoing artwork - everyday, we go back and forth from eden to paradise a couple of times, and have lunch and dinner together, mostly traditional hungarian dishes. in the region, both slovak and hungarian languaje is spoken, due to the cultural influence and proximity to the hungarian border. i collect small stones at nearby mine lakes. im still strongly under the influence of stones, after the summer rituals. i go into cold water some days. ritual is active. freshness needed. everyday i walk around dunajská streda when the sun is not so high, always better in the afternoon. i collect small monochrome particles to build the next minimal unstable intallation. protista number 5. in the walks i touch surfaces and plants. every town has its own atmosphere. i read the texts by architect peter zumthor in the nights about this issue.

i walk, record and and write in cafés in the center of town. all blocks are numbered with big letters. i carry the things i collect in the blue bags, as usual. i picture Márta and Yuri with the bags, in the factory area. Kiss on top of a tyre hill and Dolan walking around. i fix the current position, and extend the translatorial series, that are part of the active secuence of monochromes. we have vernissage in a gallery in the center after a week of work. show is good. we drink some pálinka. i record private performance with Afarin, that uses the black shoes and the black bag i substracted from streda. i display both items in the floor, as invisible art. anybody could had left them there. you have to watch the video to undersand the origin of objects. both black objects work in the exhibition as unstable readymades. like the city particles we played with LLLL. my special thanks to all resident artist for their kindness and the sponsors and staff at eden and paradise. 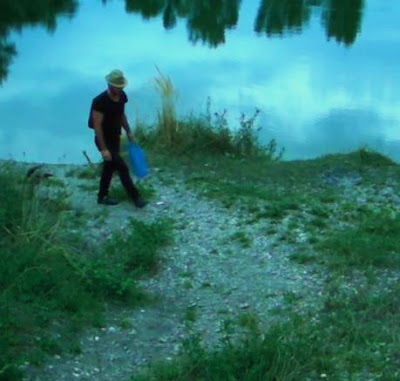 following week i move to kómarno area. in the county of isza, nearby the largest river in the region. the danube. it rains it rains. we all live in a big hotel house with rooms upstairs and a large livingroom. the good cooks take care of the meals. the place is fantastic, very natural, as it is part of an an eco-farm. there are fields with potatoes and corn all around. also animals. horses, pigs and sheep. right next to the pension, there is a big studio for the artists to work. it is an old wooden farm. we work in the day with passion and share evenings with presentation and some music. i walk the fields in the early morning, and get inpired by the yellowish light. muddy shoes. i record some glimpses of silence, and the low clouds in the distance. in the morning, together with yuri, gilah and afarin, we visit patinse, nearby, where the symposium has been held in previous years. a local sponsor offers us coffee and shows us his collection of more that two hundred paintings. we make a quick visit to the shore of danube, and have some drinks before we go to kómarno.

during the week many new artists arrive, so we are always busy talking. in the evening, after dinner each artist presents an idea for the group. gilah talks about her art as healing discipline. she has lived in the wilderness and travelled around the world meeting scientist and artist all over. she is professor of art in los angeles. stano cerny presents his fascination for the neo-vernacular constructions around his house in the jungle, near playa del carmen, in mexico. marion shows her new website, backed up by her husband, that came along. maria shows her emotional aquarelles, related to her life, and her performatic and collaborative paintings and installations. in the night we sit outside, in the balancing chair. gilah tells me that she met the eames copuplein the sixties, i love to hear her stories. i give her some tips on french situationism, sociology and philosophy. while we talk in the dark, the only sound we hear is the grass being cut by the teeth of two horses nearby. i remember the white horses by raymond carver. pure joy.

the morning bell calls for breakfast. i walk the surroundings with afarin and the blue bags. after the action in the gallery she performs again. i go walking to pattinse, takes an hour, taking the road, where i collect fruits and seed. there are blue berries and plums. in the road i find a dead bird and a smashed dog. dead icons. fallen stars. the round water deposit looks loke a gigantic lollipop. in kómarno i walk the periphery. im interested in see ordinary life. kids on their bikes. i find some furniture and apply the knive on them. three fast cuts is the new form. just some seconds should be enough. im not tagging lately. only one piece of meat needed per animal. art series are more compact and lighter now. and faster. the atelier has big energy. the symphony is silent. each artist has his own subject and speed. i see each artist as a living sulpture. to build memory in the context of the residence is part of my ritual. trees, stones, water are basic elements to start with. then the social. i spend time observing the movements. when i visit them i bring drinks sometimes. i hold micro-vernissages as anthropological excercise inside a community.

i was a painter. i might still be a painter. depends on how long you can still call yourself a painter. the memories i smashed for my early paintings have evolved to different forms. i still want to aprehend memory. the emotional junk. now the memory is built in the form of a composition of elements. to capture space-time-sound situations and generate a narrative. the text that holds. this naturalized process is becoming a ritual. of course ritual includes a series of actions, the personal tools i use to fix my work. walking and conversation are probably two more basic ones. when walking, there is a double purpose, its simple. one, is to activate oxigen in the brain and generate the ideas, to compose the text, the concept that becomes motor of all. simultaneously, while walking, i meet odors, lights, sounds, textures and bodies, that affect, define and stregthen the idea. if i sat on my chair i would miss this dual effect. so the second purpose, since i use cameras, is to record the details, to use the eye and the ear i have on my hand as a spoon, and collect the cream of the days. one or two minutes a day, not so much, buiding a compressed synthesis of my transit. art of being.

situation is durational. shahpari gives me a nut she collected at her friends house. maria gives me some films to watch in my new trips. pooneh makes plans to build an architecture workshop in teheran. shayma works on her self identity instagram series. in the night we present our works. now is my turn, so i go fast on my origins, architecture, the street as scenario, the tag, the memory, the life in the gallery, identity and desire, and the origins of LAPIEZA, the spacial shows, the relational collages, the trips to mexico, to croatia, london, the hyperlinks, the monochromes, the unstable, the social sculptures, the bags. i dedicate all the energy of that show to my dear friend françoise rohmer. ali soltani shows his delicious black and white drawings and paintings, then we make a fire. 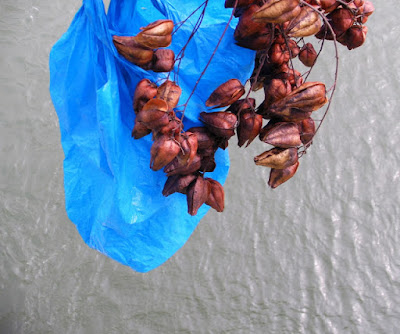 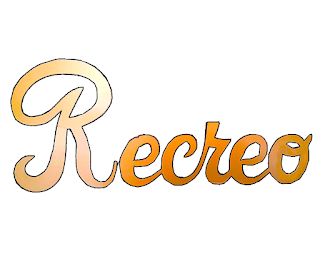