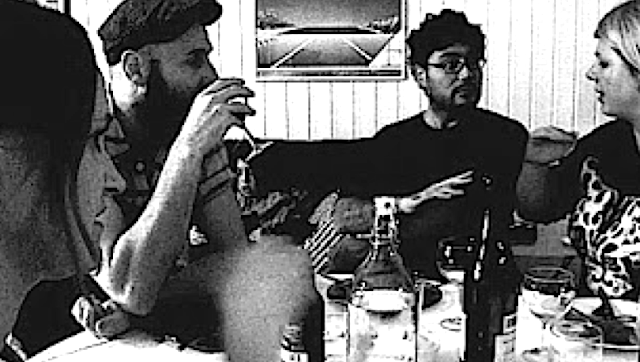 This short essay should be a fast ride both on the theory and the actions related to some recent works of artist duo BOBRIKOVA DE CARMEN. On one side, we could analyze key concepts in the current production of ART AS RITUAL, and ritual as art form. Chewing a simple chronology on the ten works that are numbered in this book, we feel ten different bones that build an unfinished yet self-standing structure. We can speculate on these ten ideas as an ongoing theater with modern scenarios and real people, that have occurred here and there as part of a larger play, or as a single and straight-forward narrative. The aim of the text, and also the book, is to rethink and explore contemporary artistic and cultural expressions from several angles all addressing the issues and consequences of the idea of APPROPRIATION while simultaneously focusing on a peculiar range of cultural phenomena, including performance, identity, social texture, community, cultural capital, food and relocation, the ingredients that are constantly visible.  These larger, previously mentioned themes we need to understand in order to jump into a deeper language that guides us to grasp concepts like othering, belonging, participation, memory, diversity, intersection, and integration all embedded in Bobrikova and de Carmen’s art praxis. The parameters to value the KITCHEN DIALOGUES are unstable. A seed is planted in each context or manifestation of the project while also addressing the challenges that artists, cultural institutions, museums, and galleries are confronted with in relational art practices. In relational art, the object of art becomes not only a multilayered artifact for social entrepreneurship but also holds a personal political agenda. It is the aim of the project to move beyond the widespread use of binaries, such as us-them, self-other, home-foreign, leaving–arriving, in order to offer fresh perspectives on how societies are continually transformed by always increasing diversity. Take what you need.

The reader could also read the book as a journey into the lives of the artists, a diary of events, of meetings and conversations among equals, where the pleasure of serving and being together is already enough. We invite you to join all events as guest, sharing in the artists’ engagement with the locale, confronting and asking rather than following a predestined cultural approach, enjoying the uneasy codex while also floating in the unsolved and ongoing questions on daily cultural syntax. The never ending struggle of priorities between models and frames, theoretical speculation and real action, where the narrative of these events, and the voices of those building the paragraphs of art are not only building a methodological scaffolding, but the art itself. The works and the text is a swing between action and theory. A battle of titans. How do we articulate a coherent discourse when we are not only willing, not only eager, but ready to change the format of language. It is necessary. The goal now is not to close this decalogue as a treaty, but to help the reader to jump into the concept of service to society. What art is made for remains open. In Fall 2013, in the city of Trondheim, some dinners were held in an old building soon to be demolished, as part of an art festival. Even though the artist duo had already been honing their artistic practice for a decade, those meals, elaborated with delicious ingredients taken from the garbage, and cooked with the tenderness of meals prepared in a michelin star restaurant, made the foundations of the BOOK you are reading. The art by Bobrikova and de Carmen has evoluted in many ways since then, championing the usual codes, presenting a wide selection of overlapping gestures, from sculptures to proto-architectures, from audio installations to junk landscapes, from plants to billboards, from ready mades to symposia. Languages are in dispute.


Let say all works by Bobrikova and de Carmen are relevant, adding angles to the whole. As an emerging chorus, they have given already the complementary couple, Bobrikova and de Carmen, recognition in the international field of contemporary art. The idea of this book, thus, is not only to number their victories, but to show a selection of the works that are connected by the use, transportation, celebration, and consumption of food: Food in basic and elaborated forms, food taken out of the ordinary to be celebrated as extraordinary with others, with you. The strategy of including you, and the context, in each piece, make the artists have a day of glory with you, sharing time and space with you. The decalogue of works short-listed for the book build a singular skeleton for their art, a symphony of events that engage places, spaces, bodies, and ideas, a form of relational art, that allows the artist to jump with security from one place to another and reinvent any given dish or situation with joy. All works of course include a biographical fact, and the idea of displacement and celebration is always present in these happy bones. All artworks are related, yet independent, like organs in a developed body. We shall now go through some ideas related to art production as art. Lets put it simply, if each work is related to color and space, as ephemeral scenograpy, now, we shall not focus on the set, nor in the content of the play, but in the form of production, the ideas behind the elegant machinery that makes this art not only possible but so tasty today.


So let’s sit on the philosophical canvas, that Hegel and his disciples stretched for us and where they described the dialectics as the engine of history through its constant evolution made possible via mediation. MEDIATION. The IDEA THAT STANDS in between. A third CONTINENT at equal distance from the poles. Where the thesis should meet the antithesis to generate the synthesis that welcomes you deeper into a chosen problematic. The mechanics of society and market favors new forms to taste: the synthesis, again, that holds a bit of both concepts. Like self-reflective works, we salt and pepper them with ethics, related to critical discussions. We guide you into know the methods, the techniques. We make an inventory of objects and places and use correct semiography to make the idea understandable, we coordinate the whole for you and with you. The surveillance and the scenography. The temporality. We take time. We use time to classify and clarify. We make a set, a recreation, a mimesis of another fact you recognize. A code and its apendix. As scientists, we make a field that studies mankind and our foggy reality, humanity’s epistemological criteria, not of scientific nature, or at least not yet. We recall those who write juicy lines like Bourdieu, Foucault, McLuhan, and Jameson. Object and words are thrown at your face, not to be collected, but with testimonial potential. We smell the amount of cultural information the moment can carry. Symbol object. Symbol food. Symbol you. No frame. The frame is behind you, invisible. The idea of the substitute. Each one of us should evaluate. Relativists say that objects contain no truth, it is polifunctional and polemic, its meaning is where the object stands. The set starts when objects are are taken away from their original places and studied or treated as representative documents of that society they are taken from. The objects are then not just objects to be seen, consumed, eaten, but they are valuable testimonies of the reality we happen to transit.  The object becomes meaning, not to represent beauty, but to invite you to understand a new meaning. THE APROPRIATION ENGINE IS ON. We eat the place, the continent and the content, the market, the business and the art gallery. We can meet open air, walk the streets, the forests, and archeological or historical places. Plus, plus WE LOVE OUR AUDIENCE, that will, can, and will be asked to evaluate all parameters, including themselves. ALL OK! So, here we have amazing possibilities in evaluating the quality of the context, the specific dimension of the place and orchestrated interactions, and the multiple representations that those can evoke.


MANAGMENT. From latin gerere, to take care of, is used in relation to SOCIETY AND ADMINISTRATION with COMMUNICATION and PRESERVATION of THE COMMUNITY. We, through through the institutionalization of artistic practices, make accounting, legality and security, and well as marketing in a strategic process linked to the study of context and its insertion into reality. A diverse reconstruction of conventions designed by society to respond to a need, that society has shown us somehow. A sort of hunger. EDUCATION. From latin educere, to drive away from. We say things that lead to curiosity are awakening parameters of reflection. Education is targeted towards the progress and blossoming of individuals. DIDACTICS. I make you know. NO TEACHING. A scenographic event is built in a Specific place for the People. FOR YOU. THE audience, THE GUEST, THE user, THE visitor, THE observer, THE spectator, THE consumer, THE READER, THE evaluator.  The Spokesman of THE people. You speak the LANGUAGE. Ruled by politics, economics, judicial, and cultural aspects, our service is active FOR YOU. Structure is in relation to dimension. Language is a form of legitimation. KITCHEN DIALOGUES is already a proto-institution. Ready for Education. With moral, physical, intellectual and scientífic purposes. The know, the know-how, the being, and the know-how to be.


03 PIZZA OVEN AND A MOBILE KITCHEN IN LITHUANIA