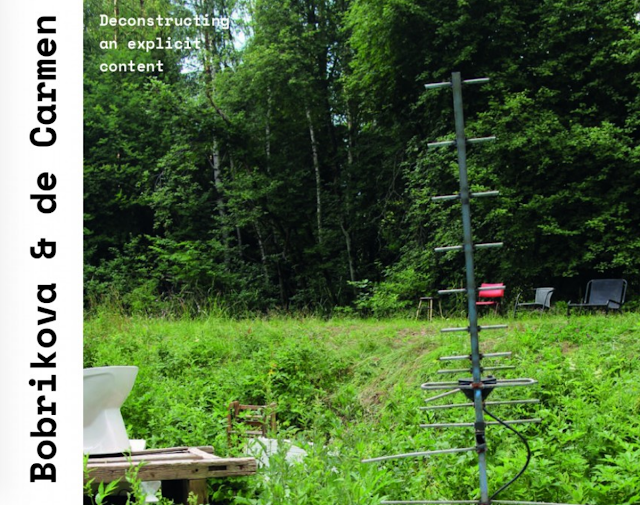 TERRITORIES ARE BATTLEFIELDS - Each piece of land, regardless of its size, is a possible setting for the staging of political reflection on the forms of social production and its multiple significant layers. The landscape is a metaphor for today's society.
THE LIFE OF OBJECTS - The duo was invited in 2018 to present an idea in a forest in Sweden as part of a series of actions in a rural environment. As in most of his recent commissions, the purpose of the works commissioned was to provide an invitation to reflect on the idea of landscape itself, and the evolving and mutating condition of nature. The installation created by Bobrikova and de Carmen existed as a collection of objects and furniture, rescued from a nearby clean point, and then distributed in a meadow next to a forest.
LANDSCAPE AS THEATER - The place was an apparently innocuous landscape with generic properties of quasi-natural beauty. The initial action of compiling objects was a harvest of local household objects already considered obsolete by fast and furious post-fordian consumers. The first action of this work is, therefore, a political one: an action of reuse and resignification of objects as a second nature with the idea of generating a visual delight from the mundane. The second action is a careful staging through the insurgency of ready-mades as installation. The landscape becomes a mimetic exhibition and therefore a metaphor for all landscapes.

THE BIOETHICAL THOUGHT - The artists Bobrikova and De Carmen have been working on the social-political scene for more than a decade, and in Deconstructing an Explicit Content they set in motion a machinery of thought to reveal certain forms of capital in relation to the idea of landscape and territory. They also simultaneously invite us to consider how to channel our behavior under the guidance of ethical thinking and the necessary redefinition of the concepts of development, progress, technology, culture, humanity, and social being. The ideas presented within the work bring us closer to the reflections of Felix Guattari's ecosophical theory. The ingredients of a polyhedral work.
STILL LIFE  - Once the objects were set in the landscape, their relationship with the social environment was activated in the form of reflective thinking. What are those objects? Why are there objects in nature? Who is placing objects coming from production surplus and immediate obsolescence within nature? Who is throwing away those usable objects without any guilt? Who has no concern whatsoever on the overall disposal of objects that took so much energy to produce? Who is threatening the natural world by exhausting our natural resources? These questions we may place when considering any given piece of land. A new nature is defined. Landscapes nowadays live with objects, and those objects may bring some trouble. Are these landscapes still nature? The romantic garden described by Kant, and then Burke, has been transformed.

THE ACTS - The piece has its official opening: locals came and saw a lot of random objects in the forest. Some smile and others say nothing. It is remarkable, someone says. Night comes, and as in every town and in every forest, the wild walks around and plays. With the morning sunrise, the elegant installation has already been destroyed. Objects have been moved, some have been stolen, and the function of the artwork has been activated. The process has started, and more questions are asked; Who has destroyed the art? Who has destroyed nature?
THE ATTITUDE - Most audiences are completely unaware of how to handle the life of objects. Objects may look like junk, and they also may be junk, while still having a life as a part of the new natural condition. Postproduction is a symbolic field that allows the artist to animate objects, reorder them and generate meaning. Behaviors are not judged, we read the facts. The artists placed external objects in the forest. The invisible actors played at night, expanding the conceptual layer of the artwork and helping us to understand what is happening in and with the territory. The territory is an idea as well as the object left behind. The landscape is also left behind. The trigger. A mine in your backyard. The entire play is about fascination, what environmental psychology studies as awe.

THE SOCIAL POLITICAL FIELD - The action-installation is thus integrated into both the physical and the social territory, turning the landscape into a post-landscape. The mere act of deviating the trajectory of objects is a political act and, therefore, an organic way of approaching the idea of art, a subtle discourse, with complex and profound reflections on the ethics and aesthetics of the work itself, subverting logical fact and entering the poetics of art. The action can be seen both as a fascinating metaphor on global consumerism, the misuse of beauty and also as a pile of junk. Both are true. The work raises several questions, both formally and aesthetically and each has multiple answers according to the analyst's point of view.

ECOSOPHICAL MOTIVATIONS - By confronting the idea of what is natural and what is unnatural, this piece by Bobrikova and De Carmen makes us ask ourselves whether leaving a normal chain of anonymous objects in a beautiful Swedish landscape is a metaphor of our daily actions on a boundless canvas. We must activate questions about the ethical-political as well as the necessary transformations of the tensions resulting from this global crisis, looking at energies and feelings, while also eliminating galloping consumerism. The work seems to be a minimalist transdisciplinary opera in the search of the wisdom to lead us towards a non-binary harmonious coexistence. We are pushed to rethink the relationship we have with damaged landscapes. This short opera may be an inquiry among the psychological, the social, and the environmental, a part of the evolution towards a new model, where we become aware of the antagonistic, yet symbiotic, relationship between society and nature.